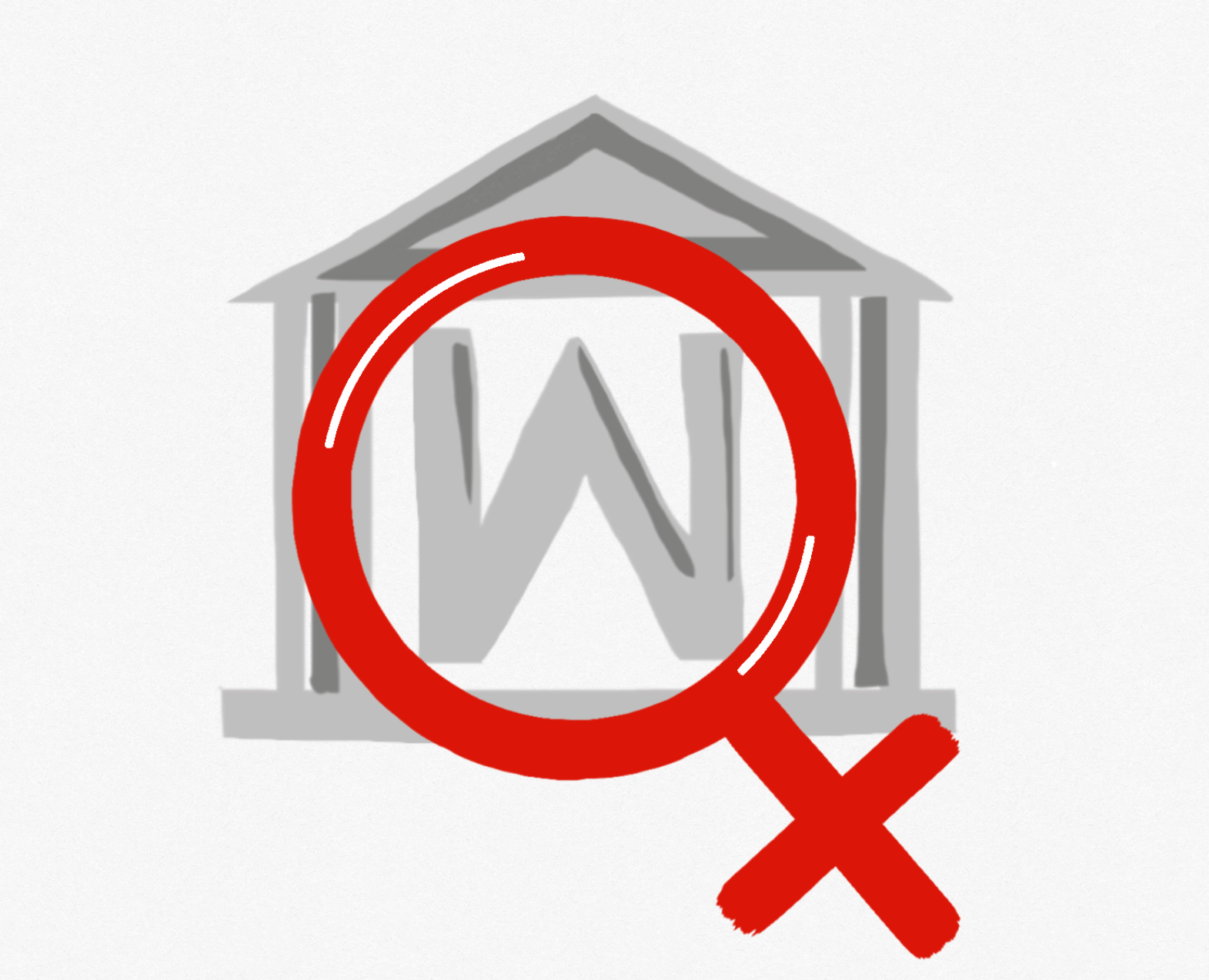 For women’s history month, I want to think about some of the invisible women and hidden figures in our museums. For behind many of the great museum-founding, civilisation-building, men whose names are remembered, there’s the unacknowledged labour of women, the working class, and people of colour.

Their work not often recognised, because the cult of great men obscures it. Their contribution has to be dulled for the work of the great men to shine. Collecting and museum making would not have been possible without this invisible labour. The people, usually men, who we put on a pedestal were able to achieve the things they did because they were not encumbered with the day to day labour that most of us do in our lives today. They had servants, they had wives, and some of them had people enslaved to produce their wealth.

When we look at our museum collections we should ask: Whose lives are visible? Whose work is visible? How does this affect the way we view this work in museums now?

Evidence of women’s contributions can be hard to find in the collections of museums and other memory institutions. Their work, whether artistic, curatorial or domestic, is simply not valued in the same way as men’s. I started writing about this in the past tense, but I had to stop myself. When UK museums were forced to publish their gender pay gaps under new legislation in 2018, the median hourly wage for women was lower than men in the majority of the museums who reported. This is despite the fact that many large institutions such as the British Museum employ their lowest paid staff through a separate company, obscuring the true gaps in wages and conditions for everyone who works under the banner of the museum, while not being employed directly by the organisation. Representation in collections remains a problem too: 35 years after the first campaigns by the Guerilla Girls, the National Gallery’s website states that it has 21 paintings by women out of a collection of 2300. Gender inequality is still a live issue in our museums. I want to think about the way this has manifested itself in the past, to see how this context affects the present.  As with so many things in museums, the things of the past don’t stay in the past.

Second wave feminism has raised awareness of the invisible labour done by women in the home. When fewer women had paid employment, their unpaid work inside the home was devalued. Now that more women do have jobs, they are still said to come home to a second shift, completing more of the household chores on average than their male partners. Conversely, men have more time to concentrate on their careers, or devote to personal interests. This is no less true of the men of the past who founded museums. Having someone else to do the housework and childrearing makes dedicating one’s life to botany, or taxidermy, or cultivating any kind of connoisseurship that much easier. The work that women have historically done without compensation has allowed men to do the work they do.

There is an increasing awareness of a more direct way that some women contributed to their husband’s work, beyond enabling them by proxy.  In 2017, American academic Bruce Holsinger started a Twitter hashtag #thanksfortyping highlighting the instances he found of male academics thanking their anonymous wives for their help in ‘typing’ their manuscripts. Sometimes this help extended to transcribing, doing archival research, editing and substantially rewriting sections of the male authors’ texts. The invisible work of the wives in heterosexual partnerships is part of a long tradition in many areas of cultural production. The most famous example is probably Vera Nabokov, wife of Vladimir, known for saving Lolita when he planned to burn it. She also edited his work, taught his classes, and managed the household. Women professionals may have a room of their own these days, but they will seldom benefit from the devoted support of a self-sacrificing spouse in the way that the men of the past did.

Invisible women were not only the wives of men who took on the role of unpaid assistant. Sometimes they actually were assistants, taking low paid roles because the more prestigious positions were still the domain of men. These were usually single women, since a marriage bar prohibited married middle class women from continuing their work after they wed.  Once married, they may have channeled their capabilities into the supportive wife role, or volunteered in some capacity.

Frequently professional collaborators’ names disappeared from published papers, if they happened to be female. This is evident in the STEM field where women were frequently relegated to the role of ‘assistant’, and may have been credited as such even if they made a substantial contribution to work. Rosalind Franklin is now recognised for her contribution to discovering the structure of DNA, but famously did not share in the Nobel prize awarded to Watson, Crick and her former colleague Wilkins. The story of the contribution of Black women mathematicians who worked for NASA became the book, and subsequent Oscar wining film, Hidden Figures.

Not long after #thanksfortyping, another Twitter event highlighted a visible, but unacknowledged female figure in an old photograph. The image showed delegates of the 1971 International Conference on the Biology of Whales. Each of the 37 male scientists was named; the sole woman in the picture was not. Illustrator Candace Jean Anderson came across the image in archives while researching a picture book on marine mammals. She took to twitter to try to find the identity of the young Black woman in a sea of men. After a couple of false starts, it was a network of museum people who identified her – she was Sheila Minor Huff, a museum technician at the Smithsonian National Museum of Natural History.

Sheila Minor Huff is 73. Katherine Johnson, one of the mathematicians portrayed in Hidden Figures, died in February 2020. Although Rosalind Franklin died young, her nonagenarian younger sister is writing about her legacy. These are not ancient histories.

These examples have shown how women’s contributions have been obscured in literature and in science. Ironically some of their stories have been uncovered by a closer examination of the archival material which, at first glance, obscures them. In the collections of museums and other memory institutions, women are underrepresented because their work was undervalued. Women’s participation in collecting, for example as the wives of missionaries (who clearly engaged themselves in supporting their husband’s careers in much the same ways as the wives described above) is invisible when only the husband’s name is recorded as the donor.⁠ Where women are acknowledged, their names are often obscured, recorded as Mrs Husband’s Name if married, or simply Miss Whoever, if not. The lack of women’s first names or any other detail makes it difficult to identify individuals.

What about women’s roles in making museums? In organising and making meaning from objects? Knowing what we do about the culture in which museums and archives were formed, surely there must be more hidden figures like Sheila Minor Huff in the world of GLAMs. Women who did the work to ensure that someone else was remembered, while remaining anonymous and unseen themselves.

Although the vast majority of early curatorial positions were held by men, some women worked in the wave of museums which sprung up in Britain from the mid-19th century onwards. One study has suggested a ‘typology’ of women involved in early geology museums:

‘1. the geological wife/sister/daughter; 2. the museum assistant (whether paid or not); 3. women who researched at museums but had no institutional affiliation; 4. The academic; 5. Museum research scientists.’[efn_note]The quiet workforce: the various roles of women in geological and natural history museums during the early to mid-1900s, Wyse Jackson,Patrick N. et al. Geological Society, London, Special Publications(2007),281(1):97[/efn_note]

The invisible work of museumifying things

In these types we can recognise the figures of wife as assistant, and actual, but perhaps not actually paid, assistant. What where they assisting with? In Kate Hill’s book Women and museums 1850-1914, she singles out documentation work as something done by women:

‘Museum cataloguing repeatedly comes up as work which university-educated women did, not just because of its mundanity, but because it was extremely badly paid.⁠’ [efn_note] Hill, K. (2016). Women and museums 1850–1914: Modernity and the gendering of knowledge. [ebook] Manchester University Press. Available at: https://www.perlego.com/book/1526970/women-and-museums-18501914-modernity-and-the-gendering-of-knowledge-pdf [/efn_note]

Hill also emphasises that men worked heroically out in the field (the Indiana Jones trope didn’t come from nowhere) while women were left with the task of ‘museumifying’ the objects which they collected. Illustrating specimens, as well as cleaning and cataloguing, were suitable jobs for women which could be completed back at the museum, or, if they were present in the field, without getting their hands dirty. An example is Hilda Petrie, wife of William Matthew Flinders Petrie, who accompanied him on many excavations, as well as managing collections and displays back ‘home’ in the museum space while he was in the field. Flinders Petrie’s autobiography includes his own contribution to #thankfortyping: ‘To my wife, on whose toil most of the work has depended’⁠ [efn_note] Morris, R (2020) The Museum Makers. September Publishing, p. 157 [/efn_note]

It should be noted here that in the colonial setting, ‘native’ labour replaced some of the domestic labour traditionally done by women. Hilda Petrie found fieldwork in Egypt ‘liberating’ because the presence of Egyptian servants meant she was excused from doing the cooking. [efn_note]Hill, K. (2016). [/efn_note] This is one of the ways that white women benefit from white supremacy, and we should be alert to it when we are considering the achievements of ‘pioneering’ women in this era.

Somebody’s got to do it…

It was not just that women’s labour was cheaper and considered more suited to clerical tasks. Hill makes it clear that because of the power imbalance in museums, the female cataloguers were left with the work the men did not want to do. Hill takes pains to remind readers that, in the case of Margaret Murray who did cataloguing work in Edinburgh, Dublin and Oxford:

‘Some of this work was, again, motivated by the need to supplement an extremely small income, rather than a commitment to museum archaeology…’ [efn_note] ibid. [/efn_note]

The idea that real museum activity, done for the love of it, is separate from paid work is never far away. The male archaeologists and collectors, the real ‘museum people’ are seen to have a drive that goes beyond doing a job for money. But conveniently their drive only pushes them through the exciting bit of museum activity. Their commitment didn’t extend as far as finishing the job of documenting what they found, so that was left to those with the need to supplement their income.