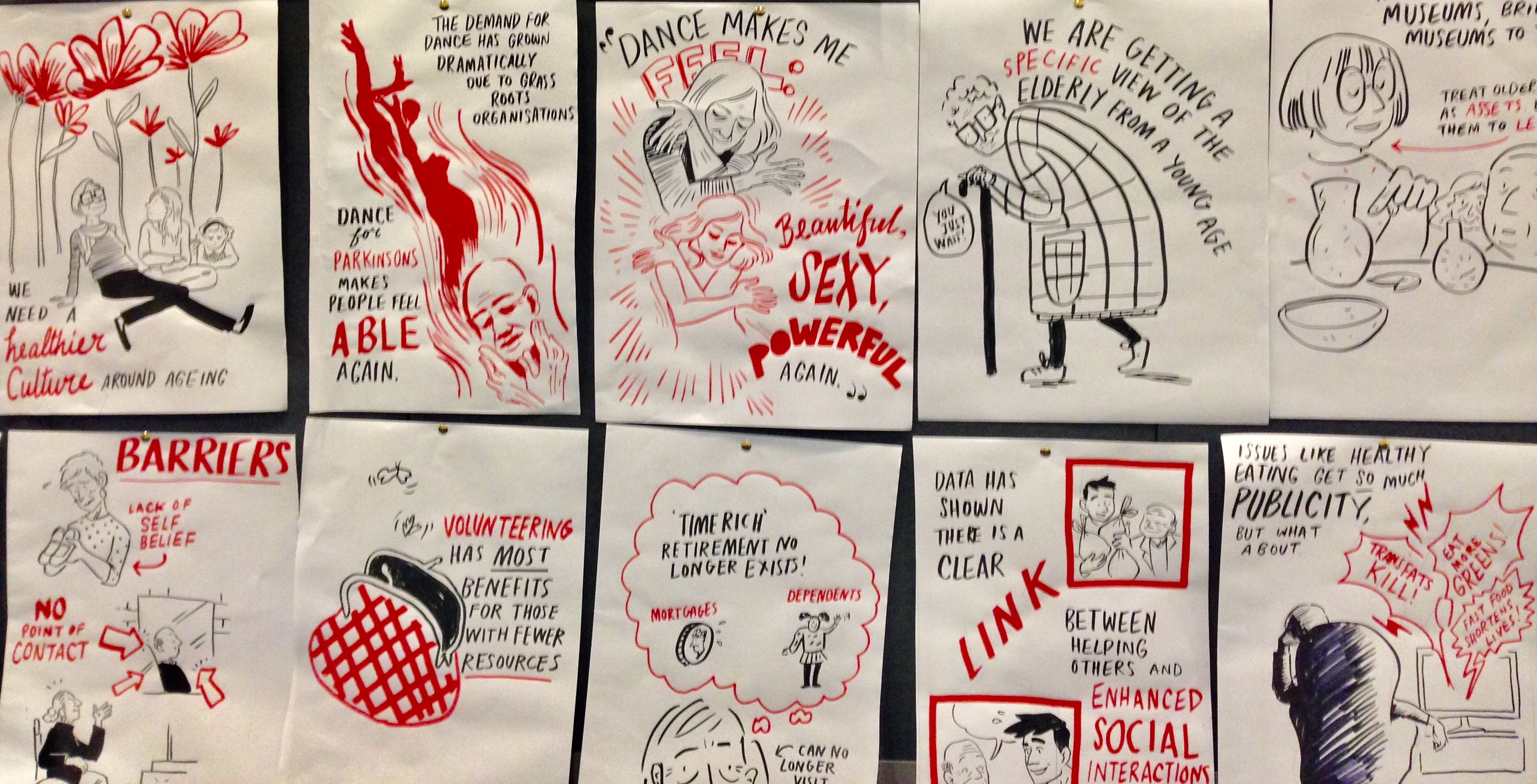 This week I attended a free conference held by the Age Friendly Museum Network at the British Museum. Although I’m not involved in any projects working specifically with older visitors, and my current workplace mostly attracts a younger family audience, I was interested to find out about this topic as it is one that is little discussed in terms of audience development and diversity in museums. I was delighted to find that Scriberia were on hand to record the conference, and my snaps of their fantastic illustrations provide the images for this post.

One of the key points touched on by nearly all the speakers was the need for museums to challenge societal views of ageing, not just in their own approach to older visitors and contributors but in the way age is represented in museum publicity and displays. As the British Museum’s Laura Phillips said in her introduction to the the day, museums are generally institutions which value age – at least in terms of their collections – and they need to ensure they value age in their communities too.

A recurring theme was the way museums represent older people. Museums are now doing better at representing different cultures, and featuring inclusive stories in their displays, and they can do this with representing age to counter some of the negative portrayals of older people in our society. In their social justice work, panel members said, museums should be highlighting the rights of older people. Museums were also challenged to include more older people in their publicity materials, so that they know activities are open and welcoming to them. 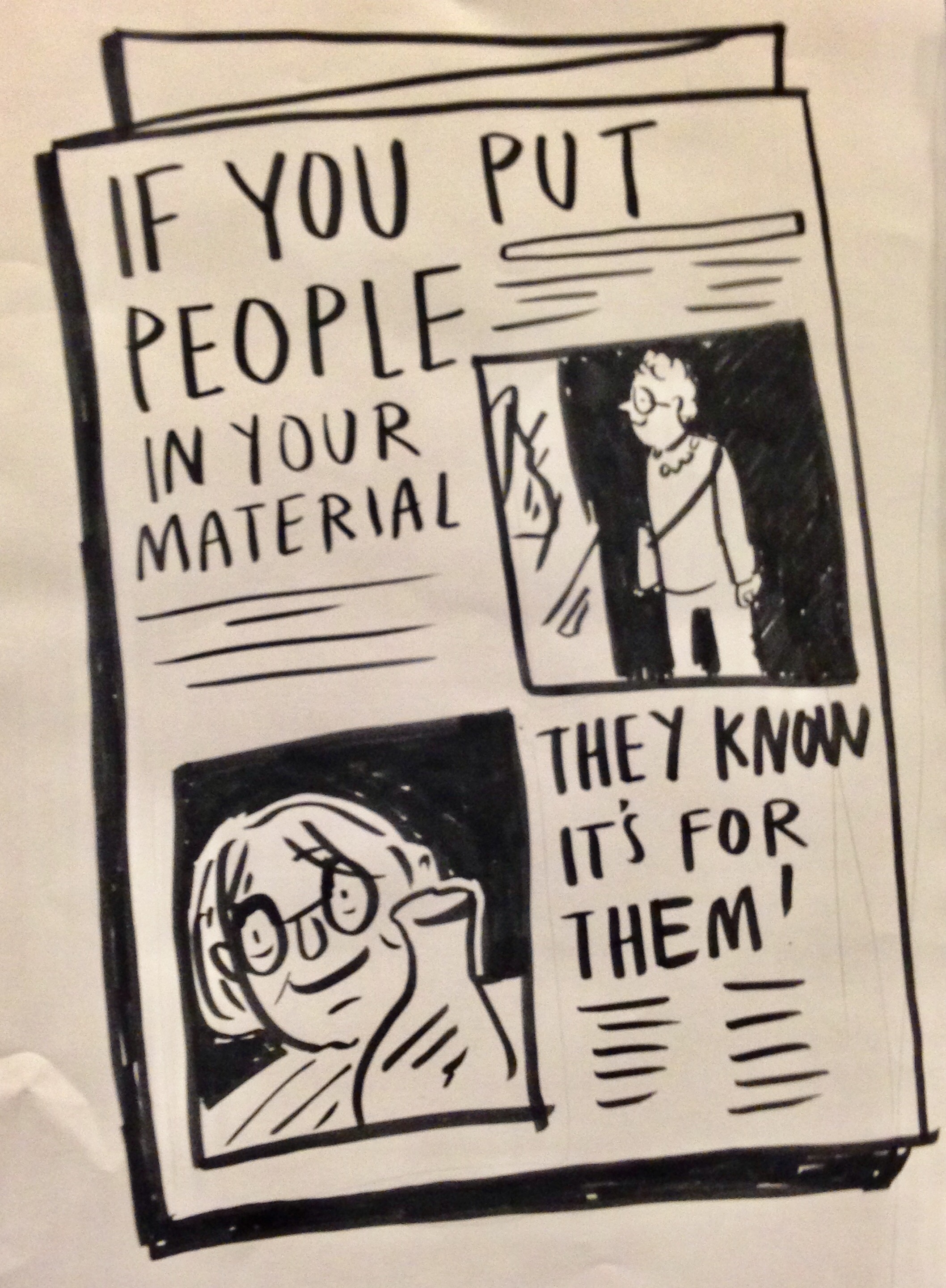 Issues around representation will be familiar to anyone who has considered other areas of diversity in museums. The principles are similar – tell diverse stories, include and represent different people in your work in order to engage them. This seems like a good time to discuss one of the elephants in the room at this conference: the lack of intersectionality with other areas of diversity. The first section of the day involved speakers from world of dance who were working with older people, and featured a short film of four or five older dancers. The problem was, as one of the questions from the floor brilliantly picked up on, the dancers in the film, and the examples given by the panel, were all concerned with white, middle class, non-disabled people doing a very specific type of dance. The woman with the question asked what about working class traditions of dance, tea dances and such, which are familiar and accessible to a far greater proportion of the population than the more artistic, performance led dance featured in the film. Yes, the speakers said, there is more to be done in terms of diversity, there are hard to reach communities, some grassroots organisations are doing fantastic work. It felt a little frustrating to hear again that ‘we know there is work to be done’ without concrete examples of good practice or even ideas about how to get the work done. From my conversations with other delegates I know I was not the only one frustrated to find we were mostly here to discuss white middle class seasoned museum-goers who were now ageing, as opposed to ageing people from all walks of life who might benefit from engaging with museums. This was not true of all the sessions, and the breakout sessions at the end of the day did touch on a broader range of subjects (there was one available on working with BME elders for example) but I think it is definitely something to be aware of when we talk about older people in museums. 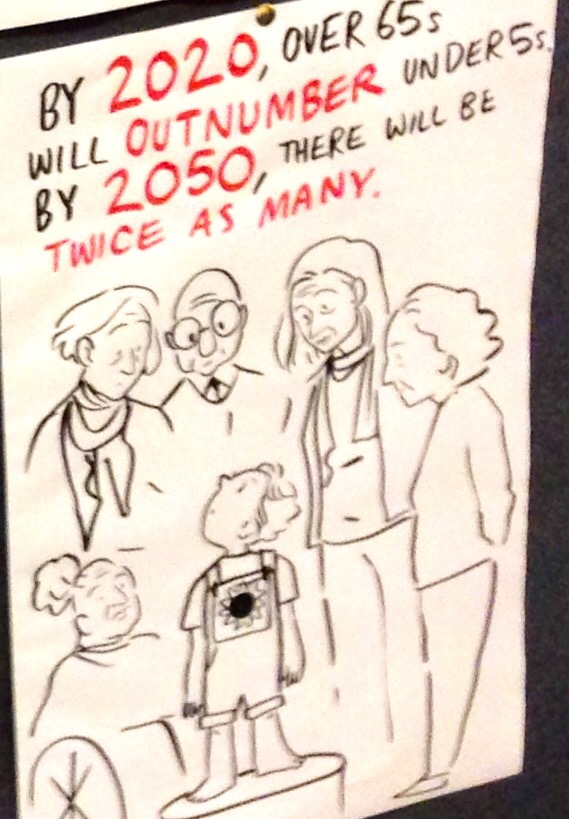 A major theme of the event was population change, and how museums will cater to this. Jocelyn Dodd from the University of Leicester’s Research Centre for Museums & Galleries gave the statistic that by 2020 adults aged 65+ will out number children under 5. This means that older people will have bigger voice in society. Museums are now much more family friendly- it’s become the norm. Now with population change older populations will become the norm, and this will affect what museums do.

Dr Kate Hamblin, from the Oxford Institute of Population Ageing, gave more insights on this topic, drawing from her research project with the BM addressing the challenges and opportunities of population ageing for museums. The population is becoming both older and more diverse, thanks to compressed fertility and increased longevity. However, this is not evenly distributed geographically (interestingly the South East, where I live and work, has one of the oldest populations, with more that 30% aged over 65 – although this is hardly surprising given the stereotypes associated with seaside towns such as Worthing and Eastbourne). Dr Hamblin also pointed out that not everyone is living longer – for example men with manual jobs have a significantly lower life expectancy past 65 than their peers who have done non-manual work.

The raising of the retirement age, extending working lives and the increasing role for older people as providers of care for their grandchildren or caring for another adult in their family, means that although people are living longer the idea of a carefree retirement with lots of leisure time is changing. Some museums are responding to this by embracing and encouraging intergenerational visits between grandchildren and grandparents. Glasgow Museums for example holds regular ‘grand day out’ sessions specifically designed for this audience.

For some time now, museums have been focusing on young people – children and families are seen as the key audience and many exhibits and activities are geared towards them. Even one of ACE’s 5 goals is focused specifically on children and young people, with no equal recognition of older people. In a panel debate ACE’s Director of Museums, John Orna-Ornstein, admitted that structures in the sector are set up to look towards young people in a way they are not set up towards older people. To catch up with population changes sector leadership will need to face this imbalance. The panel encouraged museums to be proactive in going out and getting involved in the wellbeing agenda, and working with partners in health and local authorities to ensure museums have a seat at the table in work with the elderly, to provide for mental health and social needs as well as physical care. Panel member Jocelyn Dodd pointed out that Wales and Liverpool Museums (represented at the conference) both have directors who are particularly passionate about engagement. In the wider sector she suggested that the National Museum Directors Council needs to be advocating for this work, and showing greater leadership.

Another key word raised during the discussions was reciprocity. To reap the social and wellbeing benefits of museums, older people need to feel like they are part of a give and take relationship, and not just on the receiving end of services. Martin Green of Care England, emphasised the need to see older people as contributors, and described how museums have the opportunity to add richness through work with older people, for example those with lived experience of war, or local knowledge which can contribute to intergenerational school projects on local history. Interestingly Jocelyn Dodd gave a different perspective on this, describing current research project Encountering The Unexpected, which looks at successful ageing and uses natural history collections. This project does not pigeon hole older people as only knowing about the past, but aims to create meaningful encounters in the present and reconnect older people with natural world. We are often guilty of thinking of older people in relation to the past, whereas this work is about engaging with present and having stake in future. 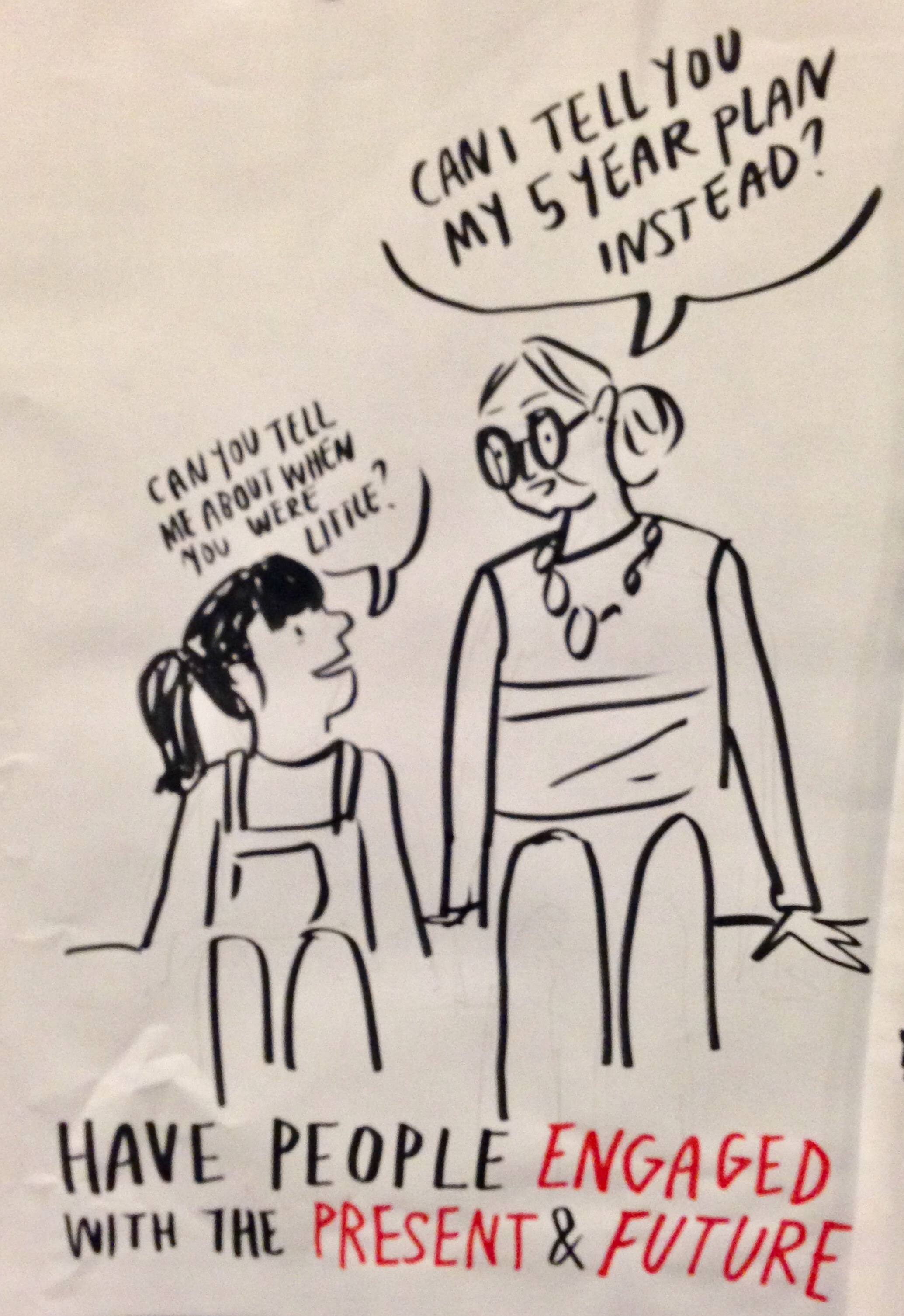 A final recurring theme was the need to see older people as people. Speakers talked about not categorising people by their illnesses, and getting rid of age-brackets; to connect with people we need to think about their interests and how they define themselves. A great example was given from Seven Stories work with nonagenarian author Judith Kerr, around her shared experiences with current child refugees and the intersections across generations and cultures. The conclusion was that emphasis should be around the things that people are interested in as opposed to ideas about different categories of people. It’s hard to argue with that, but as I followed the event’s hashtag on twitter I found myself worried by comments to the effect of ‘does this mean we can get rid of tick boxes (recording equalities info)’. Yes,  it is important to treat older people as individuals, but simply saying people are people is a slippery slope towards the attitude of not ‘seeing age’ as some claim not to ‘see race’. We have to recognise and acknowledge difference in order to cater to broader audiences, including older people and all the diverse identities they intersect with. 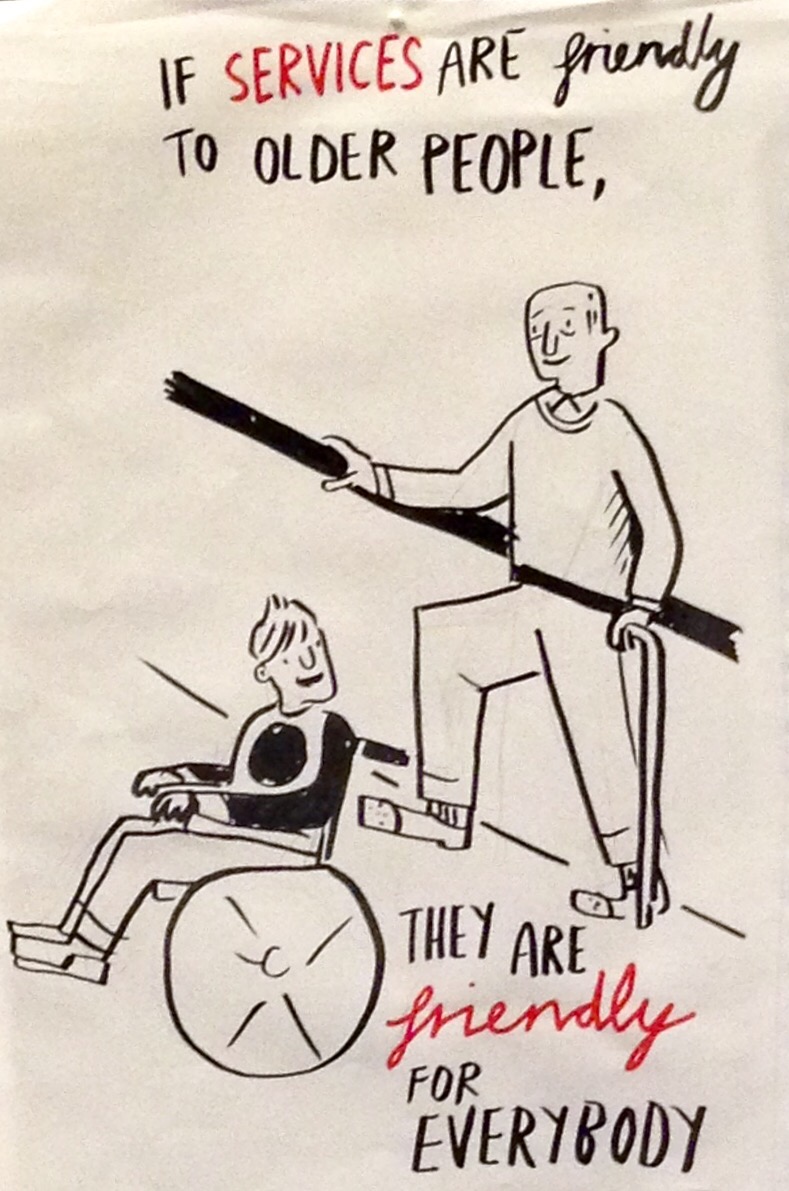