This post is an ironically slow response to a session at the 2016 Museums Association conference, entitled ‘Rapid Response’. I wasn’t at the conference, although I followed along through social media and the live streams where I could. The reason I’m responding to some of the ideas in the session now is that I attended a Museums Association South East members meeting this week, and conference recaps formed part of the discussion. I’m not the only one revisiting this particular session either, as Tonya Nelson in January’s Museums Journal also revisits its themes in her column ‘We need to respond to the world around us’. Both these discussions and Nelson’s piece reflect on the idea that museums could operate more like newsrooms, reacting rapidly to current events, but also offering thoughtful and well researched analysis of subjects in the way that long-form journalism has traditionally done, but that in the age of 24 hour online news is becoming less common.

All of this is particularly pertinent now with the media, particularly in the US, under threat from the phenomenon of post-truth, fake news, and ‘alternative facts’. Trump’s administration has been declaring legitimate media outlets as ‘fake news’ when they report something he does not like, and prohibiting publicly funded research from being shared directly with the public.  It was surprisingly not a journalist but National Parks Service social media staff who made a stand this week. First a National Parks account enraged Trump by sharing someone else’s tweet comparing the size of his inaugural crowds to Obama’s in 2009. The Badlands National Park account then began tweeting facts about climate change and criticising the new administration’s policies (the agency has since said these tweets were written by an ex-staffer who should no longer have had access to the account, and deleted the tweets). Subsequently various rogue or alternative agency accounts have shown up on Twitter, with the apparent aim of sharing information which they have been banned from officially tweeting by the new regime.

What does all this have to do with museums? Well the National Parks Service could certainly be considered museum-adjacent. Publicly funded, responsible for preserving (natural) heritage, educating people about it and encouraging them to enjoy it. Following this week’s events on Twitter, the hashtag #MuseumsForFacts has appeared, along with plans to organise ‘museums and cultural organizations for a day of resistance to share facts relevant to our field using a shared hashtag’, inspired by the National Parks tweets. The official hashtag for this is now confirmed as #DayofFacts. The campaign is asking for museums to sign up with their official institutional account, and there in lies the potential difficulty. The Twittersphere may have rallied behind the Badlands rogue tweets, calling the person who wrote them a hero, but when so much attention was drawn to the account, officials deleted the tweets. This may be a sign of the censorship of the new administration, but it’s also part of a much more common problem with museums and other public institutions on Twitter. Organisations want to be relevant and part of debate on social media, they may even have a commitment to social justice, but they are fearful of appearing biased, of offending someone (perhaps their own sponsors) or simply getting the tone of their tweets wrong. So they miss the opportunity for rapid response, and shy away from political debate. Lots of museums still have the kind of woolly mission statements that don’t really stand up to scrutiny or state what their purpose or place in the world is. They do not have a unified editorial stance on issues or do not want to be seen to. It is difficult for a large unwieldy institution to react quickly to events and distill its reaction into a punchy 140 characters. Some museums have taken a stand though, with the Anne Frank Center writing directly to the President: 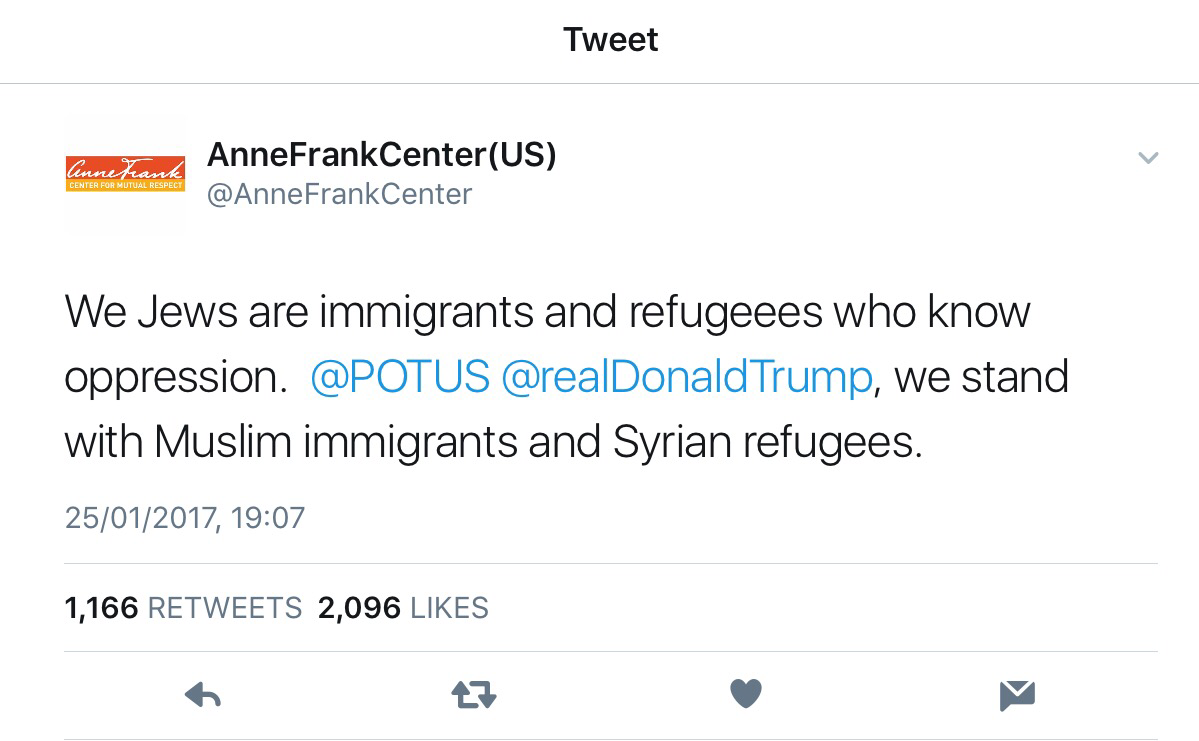 The Anne Frank Center is very clear about where it stands as an organisation on these issues. Its focus is on ‘exposing and fighting hate in the world today‘. This strong stance is understandable given the organisation’s background, but this is not to say that it is any less brave or admirable for speaking out. If more museums had a solid and avowed sense of what their current mission really is, perhaps they would be less reticent about taking a stand.

One way that museums can use their particular skills and resources to shed light on current events is to make comparisons with the past. I happen to be writing this on Holocaust Memorial Day, and lots of museum are tweeting messages of remembrance and respect for victims of the holocaust, while at the same time suggesting comparisons with the intolerance and injustices which are either already happening today, or are feared in the near future. These messages are particularly affecting when they tell the individual stories of victims, or include the testimony of survivors. Museums have the tangible and intangible assets to tell these stories, and they are trusted to do so.

Twitter is a fantastic platform for responding rapidly to events and sharing hot takes, but museums are still not particularly well-set up for either of these things. What museums do have is evidence, in the form of collections, archives and oral histories, and a high level of public trust. As Tonya Nelson suggests in her article, museums’ failure to respond rapidly is not a capacity issue, but one of mindset. There is a perception that effectively engaging with current affairs is too much work, that museums can only tackle issues through big, highly-researched exhibitions which take a long time to put together. Perhaps museums should be playing with the short, snappy format of the tweet in a context that they are more familiar with. Nelson suggests ‘small displays with labels pointing to other resources’ as a way of keeping museum content relevant and responsive. A punchy, bitesize display could have the immediacy of a tweet, and keep museums working in the IRL, tangible and object focused realm that is their unique selling point.